The tale of the tape: Influence Network's 2020 stats 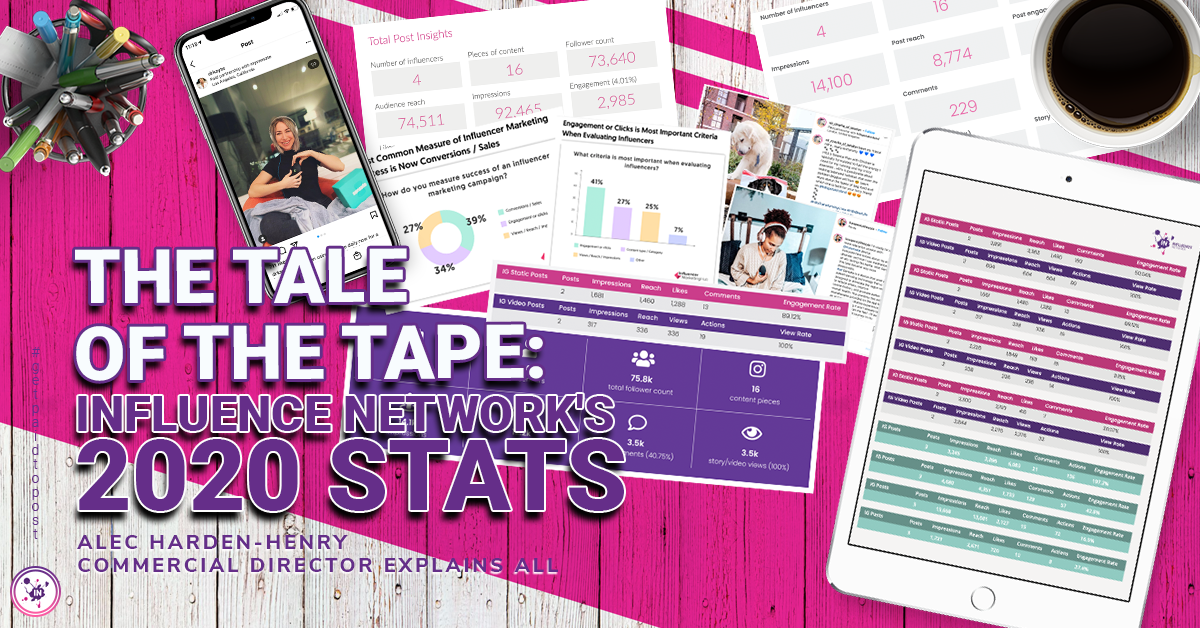 We like transparency and we like people who actually do what they spend a lot of time saying they can do.

We think (and often say) that we can make a huge difference to your influencer marketing campaigns.  We put our heads together and thought about how we could show that. And the answer was simple.

How about just releasing the metrics from our campaigns in 2020? Like we said… simple.

Here then are some of our top line performance metrics from 2020 - anonymised, of course - with some reflections on how we did and how we see these numbers changing. Benchmarks, when referenced, are based on Influencer Marketing Hub’s ‘The State of Influencer Marketing 2020: Benchmark Report’.

We’re delighted with this metric and here’s why.

The benchmark report’s best average engagement rate was 9.38%, for influencers on TikTok with below 1,000 followers.

So, whichever way you look at it, we outperformed the benchmark for our clients by a minimum of almost 2 percentage points and a maximum of around 7%. Yes, that’s 7%! Think of what a difference a 7% better engagement rate would have for your campaigns. We think that’s a drastic increase and we’re delighted with it.

We won’t harp on about the detail of this result, but needless to say this was a high-performing campaign, which really showed off the power of using our AI-driven engine to find influencers hyper-interested in the product being promoted and with perfectly aligned audiences. And that engagement rate shows!

Impressions as a percentage of influencer followers: 84.45%

In simple terms this metric shows that our campaigns potentially reach a whopping 84% of the people who follow the influencers we engage with on campaigns.

Now, of course, looking in more detail, that may not be true. This is impressions, so individual followers could have looked at an influencer’s post more than once, for example, decreasing the overall percentage of followers who saw the posts. Still, we think it’s a good indicative measure of the fact that our influencer’s sponsored posts engage their audience.

Campaigns this year where total reach surpassed the follower count of the influencers working on the campaign: 5(!)

So in not one, not two and not three… but five of our sponsored campaigns this year, we achieved a higher reach than the number of followers of the influencers we engaged to promote the client’s message.

The pre-existing audience, obviously engaged by the influencer’s sponsored post, helped us to take the campaign message to an even larger audience than we originally scoped.

Now, obviously this happens all of the time with viral posts that go beyond any given account’s follower numbers, but rarely does this happen with sponsored posts. What’s effectively happening here is that people loved the content so much that they made a sponsored post go viral! And that is rare.

Well, apart from here at Influence Network where of course it happened here five times in the past year… *cough!*

Facebook advertising is considered relatively cost effective (cheap, even) by most who engage with the platform and, often, it can be. Here are the reported average CPM figures for Facebook in the UK and US;

Influencer marketing, done well, doesn’t just engage more people and go further, it is literally ‘pennies on the dollar’ cheaper than social media advertising. We’ve known that for a while (and you probably have too), but it’s nice to have some actual figures that prove it.

Onwards and upwards in 2021

We’re delighted with these figures, but we honestly think they have further to go.

‘Influencer marketing’ as an industry is still often misunderstood to mean Kim Kardashian promoting a product, but working with our micro influencers we know (and can prove!) that it is so much more.

We’re constantly updating our discovery algorithm and campaign delivery tech with learnings from campaigns. This, in turn, feeds into better discovery and better campaign results. So we expect our stats to outperform the industry even further this year!

Results like this can (and do) change brands. Marketing budgets go further. A community is engaged. Real solid marketing growth is achieved.