The ASA influencer marketing guidelines are crystal clear but, let’s be honest; your influencer hasn’t read them. Now what? 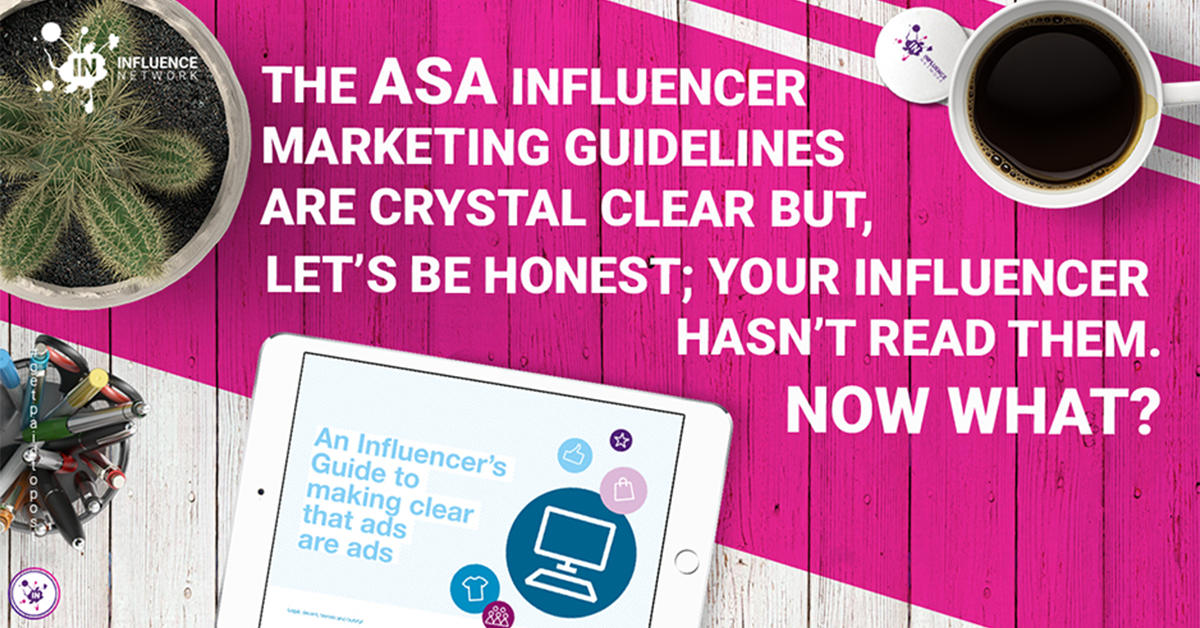 After a post I made in February on LinkedIn got a lot of attention, I thought I would spin it out into a topic for a blog post. Controversial headline? Maybe? But it’s something that we all face in our industry so here we go.

At the beginning of February the Advertising Standards Authority (ASA) issued new material aimed at influencers and brands to help them to understand their responsibilities when running paid-for posts.

There was no new guidance in the material, no tweaking of the rules, just the same rules in a new portal which now includes infographics and flow charts.

The ASA’s publication of the new material, whilst helpful, also bows to feedback and pressure from influencers and agencies that the current guidelines are complex and ‘impractical’.

In reality the ASA guidelines have always been crystal clear and whilst there are specific edge cases that need to be looked at, the new material emphasises how easy staying on the right side of the ASA should be. ‘Make it clear… there isn’t really much more to it than that’ is the new ASA mantra.

The problem for brands arrives when influencers have not considered the ASA guidelines, a situation which mainly seems to exist because influencers are not reading them. The ASA’s guidance means that, as long as an influencer includes the #ad hashtag “at a minimum” then all should be well. And yet, in the ASA’s recently released annual report influencers were cited as being the source of 26% of complaints regarding online marketing. “Influencer posts dominate online complaints”, read The Drum headline, with the total numbers cited as 4,401 complaints against 3,670 posts.

Whether the newly produced material will have an impact or not remains to be seen, but on the assumption that a percentage of influencers still won’t read the infographics and flowcharts, where do we go from here?

The calls for greater regulation feel wide of the mark, as well as, taking the above as true, not actually doing anything to address the root of the problem. It does not matter how many rules you introduce if those playing the game aren’t reading the rulebook, no matter how many pretty diagrams it includes.

It’s also worth considering that, whilst it may not seem like it sometimes, there is a coherent argument that influencer marketing is already a well-regulated area when compared to more mainstream marketing practices. Consider, for example, the ‘tricks’ that go into widely-seen food advertising. When putting motor oil onto a pancake because it looks more attractive than the syrup you’re selling is OK, but forgetting ‘#ad’ is not, it’s easy to sympathise with the influencers. Just who in this scenario is flouting consumer protection laws about promotions being ‘misleading’ and featuring ‘upfront disclosures’?

Fairness of the regulatory environment or otherwise though, the fact remains that there are rules to be complied with and someone is going to need to make sure that influencers do just that. Brands will rightly be concerned that influencers they partner with know the rules and that there are failsafes to make sure they abide by them. Given the attention that comes with a post being banned by the ASA some brands may decide to take the risk that the influencer knows what they are doing. Others though will take on the role of policing what their influencers offer, in case the brand suffers reputational damage at the hands of a problematic social media post.

There is also a coherent argument that despite the ASA’s steps, this is a problem that is going to increase, rather than decrease. The situation created by the COVID-19 pandemic has meant that more and more brands are utilising influencer marketing as a viable channel to go to market. Some brands and agencies are having to do this at speed, as they pivot away from town centre billboards, print and advertising in places such as the London tube. There’s more advertising spend, heading towards more influencers, some of whom do not understand the rules, at a faster pace than ever before. That’s not a picture that’s going to make the ASA’s job any easier anytime soon.

The use of tools such as our own platform - which gives brands final say on influencer’s suggested posts and mandates the inclusion of certain wording, such as ‘#ad’ - is therefore only likely to increase as brands search for a safety net. The idea of the ASA guidelines is that they enable the industry to self-regulate, but in the absence of the rulebook being understood clearly (or even read…) by all, it will fall to brands and their partners to play the police officer.

And that won’t be where the responsibility ends. If influencers continue to ignore the rules then more draconian regulation may be inevitable, something that may create a case of ‘be careful what you wish for’ for all involved. There are only so many years that influencers will be allowed to ‘dominate’ the ASA’s annual report. To avoid the situation of over regulation, brands and their partners will need to play the role of educator as well - as we do with the micro influencers we work with - helping influencers to understand the rules and showing how they can remain trusted by brands and public alike.

Whilst this situation can involve some increased leg work for the brand or their platform it may ultimately be the best picture available. The alternative - more regulation, greater penalties and less creative freedom - is not necessarily a world which will benefit anyone.