The 3 Step Approach To Any Successful Influencer Campaign 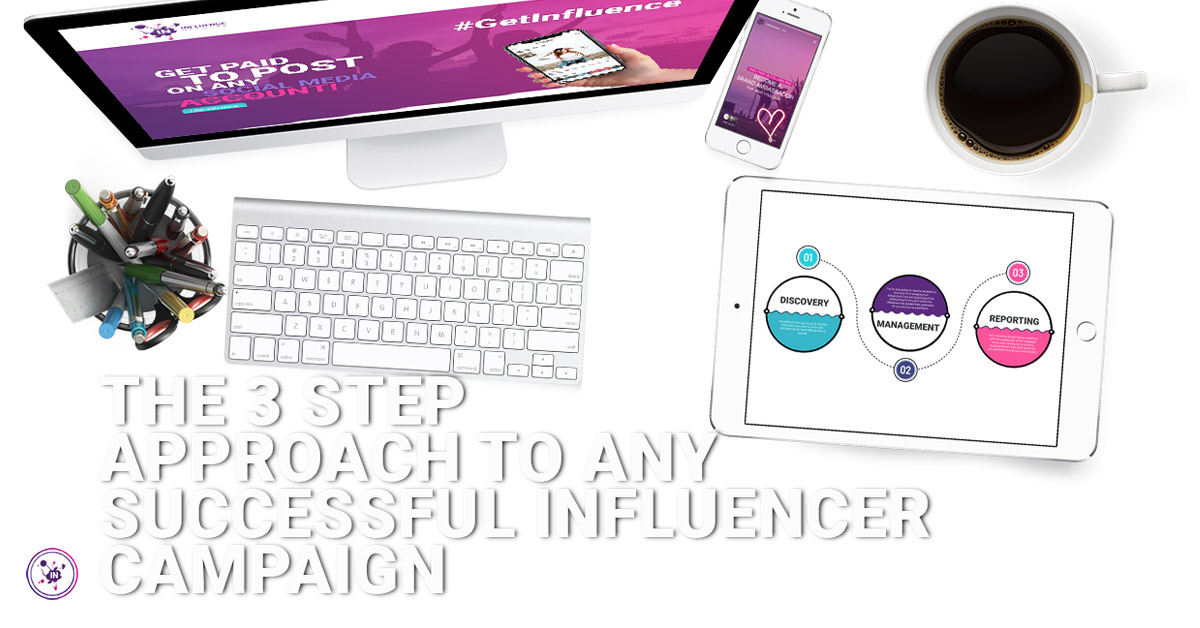 If you feel like your influencer marketing needs some structure, then you’re probably not alone. With the marketplace still evolving we’ll often speak to influencer managers whose main problems stem from not having a set routine in place when it comes to doing what they do. Most are brilliant at liaising with influencers and securing productive partnerships, but if you want to do this at scale then you’ll need to adopt a consistent methodology. To help you do just that, here’s the basic three stage logic that underpins Influence Network’s platform. We apply this structure algorithmically, through the software, but there’s no reason why you can’t use a similar structure if you work manually. Let us know how you get on! # Step 1 - Discovery

First thing’s first: you’ve got to find the influencers you want to work with… and that can be more difficult than it sounds. If you’re doing this step manually then the first thing to do is to get a really good brief on what type of influencer and audience is required. The last thing you want here is to be told that you need to find a running influencer and then later be told that the influencer needs to wear ladies running shoes, thus wiping out half of the influencers you’ve managed to find. Ask questions of the brief you’re given and get as specific a profile as possible. Then you’ll need to really dig into your social networks of choice to find influencers who match the bill. Look for hashtags which appear to be regularly used by influencers who match your profile and narrow down specific users from that point. Bear in mind that this is not always straightforward. You need to find influencers with an audience that your brand wants to reach, but that requires more digging and logical thought than just browsing hashtags. The example we give to illustrate this point is Kim Kardashian. It’s tempting to think that you might partner with Kim if you wanted to sell women’s fashion, but look closely at her followers and you’ll see there’s plenty of male teens in there, as well as other demographics that would make a good target market for things other than women’s fashion. Once you’ve figured out how to properly assess your influencer’s followers then keep a spreadsheet of the influencers you think you’ve identified who fit the bill, with a link to their profile and follower count as the minimum amount of information to capture initially. You can add separate columns for elements such as the fee you’ve agreed with them at a later date, as you require. If you’ve been given a specific target for the reach you need to achieve then bear this in mind when it comes to considering how many influencers you’re going to need to find at this stage. Not everyone you contact will be able to work with you so aim to ‘discover’ more influencers than you need and work backwards from that point as you contact them. # Step 2 - Management

You’re now going to need to establish a structure for managing your influencers from the beginning of the relationship, to the point where the influencer has posted their promotion for you and you’ve paid them. The following points are the basic actions you’ll need to carry out; - Background check - before approaching or agreeing with influencers, many brands will now check their social media history to see if there is anything there which could cause the brand damage. Think about how you’ll do this and what you’ll look for if this is a step you require.

- Initial approach - you’ll need to get in touch with your discovered influencers to see if they will work with you.

- Negotiation - what are you willing to pay for a posting opportunity? What’s your target price and what would you have to walk away at?

- Briefing - how are you going to pass on to the influencers what’s required? Think about the use of media, whether you need to provide examples and whether different influencers will require unique briefs.

- Reviewing - How are you going to approve the content before it’s posted live on social channels?

- Checking - have the influencers done what was agreed within the agreed timeframes? You could use your original spreadsheet for this, tracking influencer posts against their original lines.

- Paying - at what point do you consider the influencer’s job done and release payment? Does this involve liaising with finance and are they aware? Will they be able to release payment promptly or will there be a delay you’ll need to factor in.

- Wrapping up - are you going to work with the influencers again? How do you want to leave the relationship? There are plenty of other facets that go into successful influencer management, but the above cover the main points. You’ll need to plan all of this into your structure to get a good outcome for your campaign. # Step 3 - Reporting

Your reporting should always match up with the original aim of the campaign. If you were setting out to achieve brand presence, then what reach did you generate through your influencers? If you wanted to drive purchasing decisions, then what evidence can you see that your influencers were successful? Think about both what you want to report on and how you’re going to show your results. Whilst your original spreadsheet could be used to collect the data, you’ll need to think about how you assess it, provide commentary and present it back to anyone who needs to know about it. Compared to the other two steps, your reporting is probably the easiest thing to plan for… though that doesn’t mean you won’t have to spend a significant amount of time getting it right!

If all of this sounds quite laborious and time consuming, then it may be worth dropping us a line. Our platform handles all of the above for you, putting the power of technology to work for the everyday challenges you encounter in influencer marketing. Ultimately, we enable you to focus on campaign strategy, creative and client delight. What’s more: it’s easy to get started with a trial campaign. Sound interesting? Get in touch on info@influence.network or 0203 918 8582

If you have any questions for us you can usually find the answers on our FAQ's page, if not then drop us an email
at info@influence.network and we'll get back to you just as soon as we can or contact us through any of our
social media accounts, link below yo!