So you want to be a great influencer manager? Here's the 8 jobs you'll need to figure out how to do (and get really good at). 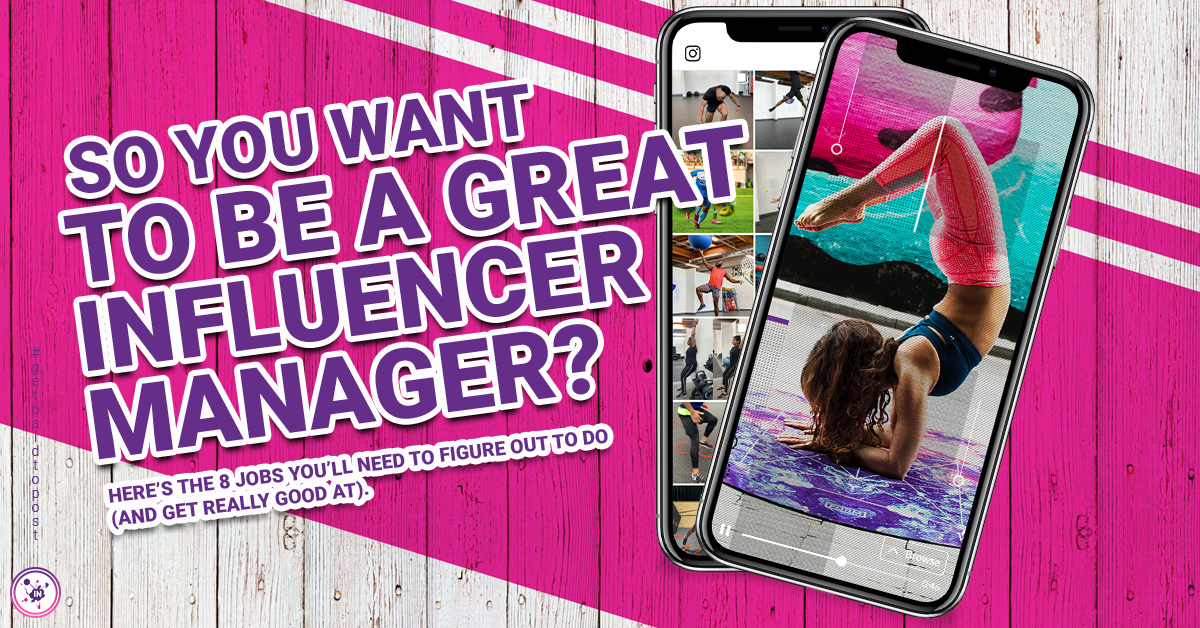 Influencer managers and community managers have a tough job. There are a lot of moving parts; a lot of messaging to coordinate and creativity to match to campaigns. You need to be detail orientated, to spot that small problem or when someone has missed off #Ad from their post, but you also need to see the big picture.

As you’d expect, we work with a lot of influencer managers to support them in delivery of their campaigns so here are the eight tasks that we see the best influencer managers excelling at. Whether it’s through banks of spreadsheets or great comms, these help you to get the most out of your influencers.

Discovery is often the first and most time-consuming task of any campaign. Depending on whether you are brand or agency side you may need a whole new group of influencers for every campaign you run. That can be difficult. Browsing through appropriate hashtags will get you part of the way, but then you’ve got to find influencers who are interested in your collaboration and have an appropriately-sized social following. When you’ve narrowed that list down you’ve still got to invite each one of them to work with you. It can be a tough ask, particularly when you’re on a tight turnaround time. Oh and then imagine doing this on an international scale, on multiple social channels and in multiple languages...

Once you’ve found the influencers to suit your campaign you’ll need to agree a certain fee for certain activity and organise the sign-off of contracts or agreements to protect your brand or clients. Influencers with some experience will be used to this process by now but influencers new to the arena may need some help through the process. There will also inevitably be a level of personal amendment and negotiation, so it’s worth thinking how you’ll handle this and how much authority you have to move on price and contractual terms.

Whilst the above two factors can take up most of your time in the early stages, the brief is the moment where the success of your campaign can be decided. A great brief can have your influencers’ creativity running wild, whilst staying on brand and on target for what you want to achieve. A muddy brief can mean you have to reject a lot of submissions that took your influencers a long time to craft. If your influencers are allowed to post without getting approval then, even worse, you could end up with material in the public domain that doesn’t suit what you wanted to achieve or actively clashes with the brand. The brief really can be everything and often defines the difference between success and failure.

Checking in on the results

Whether influencers submit proposed posts to you for approval or post straight to their accounts on their platforms of choice, you will need to review their content creations. On the Influence Network platform we ask influencers to submit two levels of ‘proof’; a link to their posts and a screenshot of the private performance metrics they have access to. This makes sure that we can be absolutely certain the influencers have followed the brief and are working to get the results we’re interested in.

Tweaking posts that aren’t quite right

If you do approve posts before influencers post to their accounts then you’re going to get to play the role of art director as well. In the scenario where things aren’t quite right for a campaign you’ll need to explain clearly how the influencer has gone against the brief or failed to follow brand rules. Often it’s an innocent mistake that the influencer will be happy to fix, but nevertheless, sometimes  these can be difficult conversations. It’s worth repeating here that a strong and detailed brief can help you to avoid these scenarios and give you something to refer to when discussing problems with influencers.

This may not seem like the most significant part of your role, but make no mistake it will take up more time than you think, depending on what level of influencer you work with. The same goes for other administrative tasks. If you target 100 Micro-Influencers and manage those relationships yourself, that’s 100 Micro-Influencer invoices to handle, 100 contracts to sign and 100 briefs to send out. Having processes (or a helping hand) for this sort of task can be invaluable.

Once everything is finished it’s probably going to be up to you to put the report together and show what happened. There are plenty of ways to measure influencer marketing campaigns, so you’ll need to settle on the most applicable and pull together the metrics. Almost certainly this will involve looking at individual influencers and at the broader picture of what your campaign as a whole managed to achieve. Pick out individual success points, but then make sure you show where your work got to overall as well.

This is a great point to show further value; either in your role or of the work your agency does. As you’re pulling together statistics and speaking with influencers you’ll probably spot opportunities. You may even be approached with a few ideas. If you can show your campaigns will work then more campaigns will follow. Brands spend on marketing that has been shown to generate awareness and/or ROI. Show that you can do these things consistently and go back with new ideas and you’ll get some very quick ‘yes’ answers.

Now, time to get some processes mapped out for these eight steps!