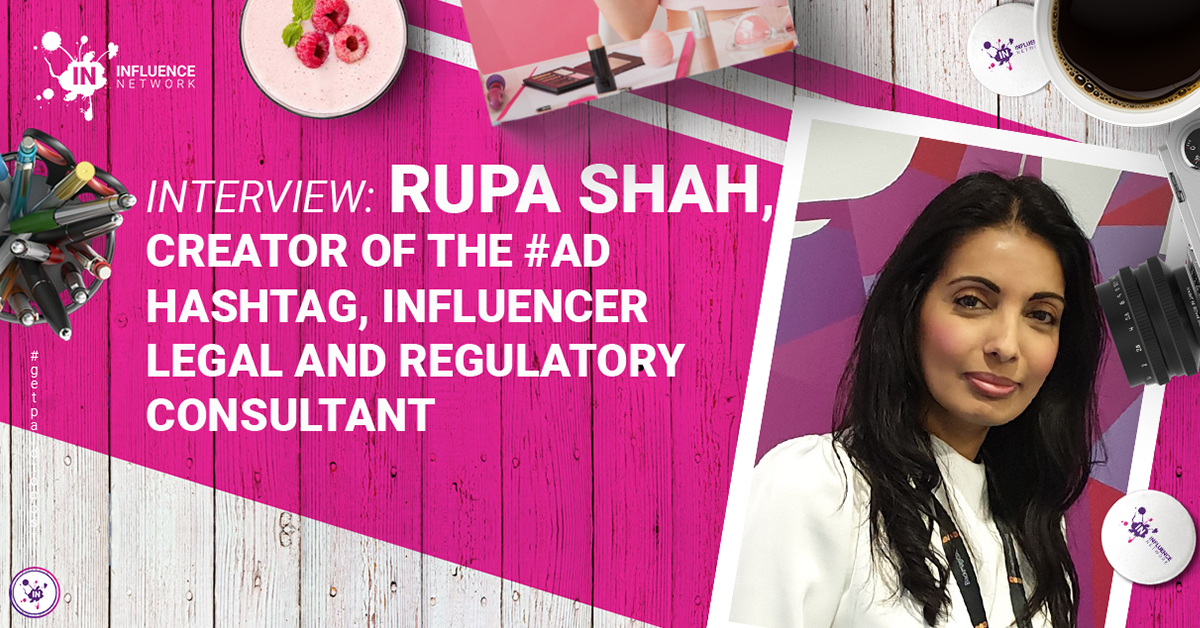 There’s no doubt that the regulation of influencer marketing is a hot topic amongst brands, agencies and influencers. Our platform helps to guide brands and influencers in staying compliant with the legislation, but if you’re ‘going it alone’ then how can you make sure you’re doing the right thing? Who will the Advertising Standards Agency (ASA) look to when things go wrong? And are we heading towards more legislation and tighter controls?

Who better to put these questions to than Rupa Shah, founder of the #Ad hashtag, now widely accepted as the standard minimum disclosure of a paid-for collaboration. Rupa is the founder of Hashtag Ad Consulting and works with brands, agencies, influencers and the ASA themselves on influencer marketing regulation. We started off with a tricky (slightly controversial) one...

Do you think the ASA understands influencer marketing?

Great question. I think they have sufficient knowledge to complete fair investigations. They may not know the minute details of brand-agency-influencer relationships but they have digital specialists who focus on influencer complaints and engage with the industry, arrange in-house talks from agencies and build strong relationships with the main platforms. When they identify a gap in knowledge they’re usually able to rectify that (e.g. by conducting research or by inviting industry specialists like myself to join their CAP panels to provide expert knowledge on key subject areas). I think there’s a certain amount of naivety and perhaps ignorance [from the ASA] when it comes to those brands that deliberately game the system and flout the rules and I also feel that [the ASA] haven’t paid sufficient attention to B2B influencer marketing but, if you compare them with regulators across the globe, on the whole I’d say they’re doing a good job at keeping up with this industry.

I think that the UK has a pretty solid system of advertising governance that is generally well-respected. However I do think that influencer marketing lags behind more traditional areas of marketing when it comes to both knowledge of the rules and compliance with them. That’s probably partly to do with how quickly the influencer market has grown in the past couple of years, the fact that influencers don’t always see themselves as “businesses” or “advertisers” and because there are a number of brands on social media that just have no intention of complying with any of the rules.

What do you think the current understanding of the ASA guidelines is amongst both influencers and marketers?

It varies. At the top end, celebrity and macro influencers often know absolutely nothing about the rules and rely on their management to provide them with things like disclosure instructions. I recently asked Rio Ferdinand if he received any guidance on disclosure from the brands he works with and he admitted there was usually none given, so he was reliant on his management team to make sure he didn’t break any rules. I actually think there’s much more knowledge (and knowledge-sharing in forums and groups) from micro-influencers who see it as their responsibility to educate themselves on the rules and avoid ASA rulings. There are some vocal advocates for compliance amongst the blogging community and quite a few of the complaints the ASA receives are from influencers who have identified non-disclosure amongst their peers and feel aggrieved that it’s not a level playing field.

It also varies with marketers. I’ve worked with brands that freely admit they can’t keep up with the frequent changes in regulations despite having legal teams and other brands that dedicate numerous resources to understanding what their responsibilities are. It’s understandably tricky for them as the rules vary worldwide but the steady stream of influencer rulings from the ASA helps to keep up the pressure on brands and marketers to abide by the rules.

Who do you think bears most responsibility for ensuring the guidelines are followed? Is it influencers or brands and agencies?

A typical ASA ruling into an influencer’s social media post would name the influencer as the publisher and the brand as the advertiser. So from that perspective, there is joint responsibility. However the CMA also holds agencies and platforms responsible and has, in the recent past, taken action against influencer agencies that were posting and arranging undisclosed advertising. Because the ASA system works primarily through the use of negative publicity, it’s both the brand and the influencer that will feel the negative effects but if a brand values it’s reputation, then it’s likely that they will suffer the most. ASA rulings have been known to result in share-price drops and can result in a damaging consumer backlash.

"the trend of focusing less on celebrities and macro influencers, in favour of niche specialists and thought-leaders will, I’m sure, continue."

Do you think more regulation, stricter rules or harsher penalties are inevitable?

I think the emphasis should be on investigating a wider range of scenarios, rather than imposing tougher rules. The rules are, from my point of view, adequate but I can see that it’s difficult for the industry to apply them when there are so many different scenarios to consider. That’s why ASA rulings and CMA action are so important – it’s not just the deterrent effect, it gives the industry a stronger steer on how they should be complying.

You’ve suggested previously that ASA maybe don’t have the resources to investigate more influencer-centred complaints, but with influencer complaints making up 25% of online advertising complaints, at what point do you think they’ll divert resources from elsewhere to tackle the issue?

Now this is a very topical question. The problem is that, although the ASA collects a levy on digital ad spend, that doesn’t seem to cover influencer marketing. There’s no publicly available data on exactly where the levy is being drawn from and how much it amounts to when it comes to influencer ad spend but I know that it is not as consistent or successful as collection from “traditional” media such as billboards, print press or TV & radio. This is worrying when you consider how traditional ad spend is dropping in favour of digital and will mean that the ASA may be pushed to justify how it could divert resources to influencer marketing, even if complaints are growing.

Is one of the main challenges with influencer marketing regulation the fact that it is essentially ‘borderless’? Arguably every aspect of marketing may become more borderless over the next few years, due to the impact of the COVID-19 pandemic and increased remote working. How do you think the ASA will respond?

That’s definitely one of the biggest challenges for influencer marketers. The rules on disclosure are generally quite similar across territories because the principle that an ad should always look like an ad is enshrined in most countries that have a self-regulatory advertising code. However there is no concrete consistency over the exact wording, where they should be placed, whether platform labels such as the “paid partnership” functionality, etc., are acceptable, so seeking advice on any territories where there is an audience (so not just where the brand or influencer is based) is essential. The ASA and the other European regulators tackle any inconsistencies and promote collaboration via EASA (the European Advertising Standards Alliance) and, internationally, via ICAS (the International Council for Advertising Self-Regulation). They coordinate and promote advertising regulation across Europe and EASA recently set up an influencer marketing group, which I’ve been invited to participate in and which seeks to ensure that all the regulators are kept up-to-date on advertising issues in the influencer marketing industry.

You work closely with influencers and brands on regulation, but what do you think of the wider influencer marketing marketplace? Where is it heading over the next few years?

There’s been steady growth in B2B influencer marketing but the regulators need to catch up with this trend and provide more guidance for the industry, as it’s not just a case of applying the B2C rulings – the relationships, platforms and scenarios are very different. There’s also more emphasis (in both B2B and B2C) on genuine engagement and long-term collaboration so the trend of focusing less on celebrities and macro influencers, in favour of niche specialists and thought-leaders will, I’m sure, continue.  We’re also seeing more transparency in terms of influencer payments and I’m really excited to see more brands and agencies speaking out about and challenging the status quo on diversity and equality issues.