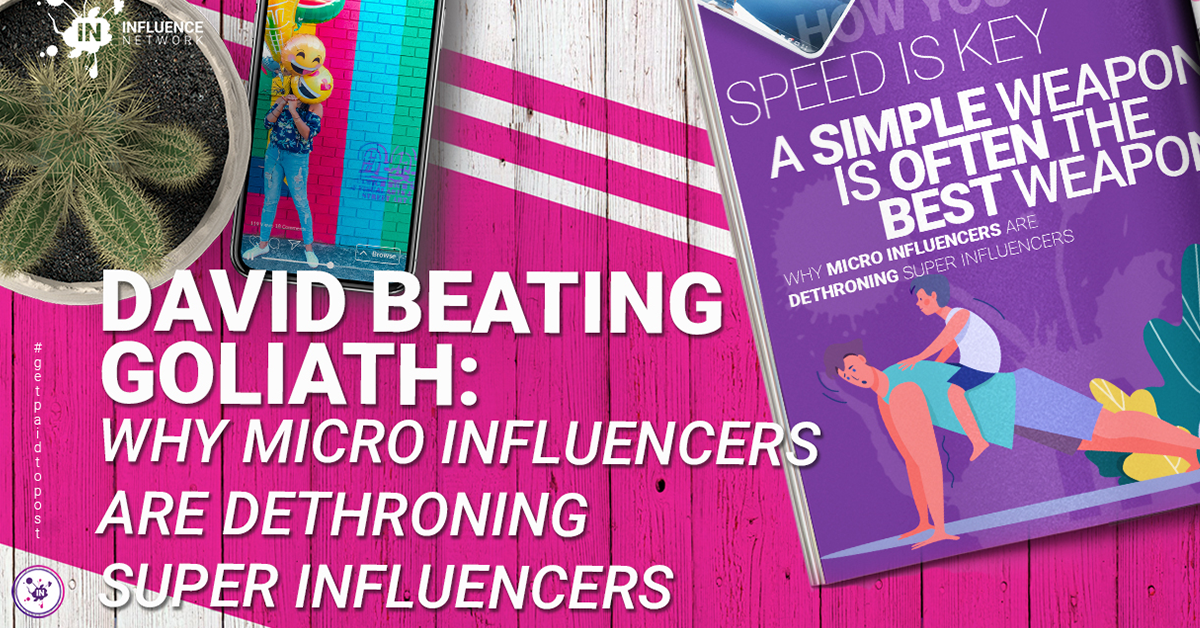 It is easy to see micro influencers as the tiny shepherd boys standing against the mighty ‘Goliath’ super influencers. You can barely 'turn the page' on a marketing-focused website without seeing something that indicates smaller, more nimble influencers are on the rise.

But when you dig into the detail, just how and why are micro influencers being so successful? What are their ‘David’ tactics that mean they are managing to generate better results than ‘Goliath’ super influencers?

Here’s the substance behind the story…

Size matters – but not how you think

But that’s not why size is important.

Super influencers may have a huge audience, but their size makes them blind to the wants and needs of their followers. Brand’s messaging is often simply lost in a sea of selfies and aspirational lifestyle shots.

Micro influencers however have a laser focus that allows them to see what their followers want and need. They have grown their following from nothing, simply by doing what they do.

Their passion and insight will help you to best tailor your message to their audience, and in turn, drive buying behaviour far more effectively.

These days, most people won’t want your product or service simply because a famous person has been paid to endorse it; they’ll want it because someone that they feel that they know and trust has said it has true value.

And it’s becoming impossible to do that if you have a million followers and are a ‘celebrity brand’ in your own right.

When it comes to Influencer Marketing, being able to work with the speed and agility of micro influencers is a major win over what can be the lumbering approach of the large super influencers.

Why? Well, micro influencers know their individual ‘personal brand’. They are their brand. No managers or publicists pulling the strings and crafting messages. No layers of administration to work through before producing content and signing it off.

Just consider the quick pivots that have happened during the COVID-19 pandemic. Micro influencers have been able to quickly agree campaigns with brands. Super influencers have lagged behind, reliant on pre-COVID processes and ways of working that they’re now somewhat stuck with.

This of course means that the potential to quickly produce relevant, targeted and topical content is far greater with micro influencers, and their price tag means you can get far more for your money.

Consider that a single post with a super influencer could  cost you around $1m (£780k). For this same money you could get over 12,000 highly targeted posts from 3,000 different micro influencers.

When we consider the speed that social media moves at and how quickly our content is pushed down in people’s news feeds, it makes no sense to blow your budget on one single post.

Micro influencers will give you the steady presence across social media that you need for your product or service to be seen and they will be able to do it at speed.

A simple weapon is often the best weapon

Where it may be assumed that micro influencers lack the reach that marketers so desperately desire, the reality is that their size is their greatest weapon.

How can smaller possibly be better? Well, the smaller an influencer is, the more likely they will actually interact with their followers. From this, they grow relationships built on core values of ‘know’, ‘like’ and ‘trust’. This seems so simple, but it is the most powerful feature of working with micro influencers.

With super influencers, they may be able to spread your message far and wide, but trust is massively lacking, and their followings can be pretty fickle.

Of course, there is a balancing act as reach is still important. But by working with a large number of micro influencers, this is easily overcome.

A micro influencer’s lack of size is, therefore, actually part of their best ‘weapon’. It allows them to spend time putting the ‘social’ back into ‘social media’. Their followers are more engaged as a result, which means they can generate more impactful outcomes for the campaigns they’re involved with.

“The true lesson [from the story] isn't don't be a Goliath, it's don't be a Philistine – the army that sent Goliath into battle for them. The simple moral is to choose your weapons carefully.”

When it comes to promoting your products and services, we think the best route is clear; you can get greater focus, faster speed and a more connected audience by working with micro influencers. And the results suggest that they are the group heading for ‘victory’.