4 reasons you should be working with micro influencers 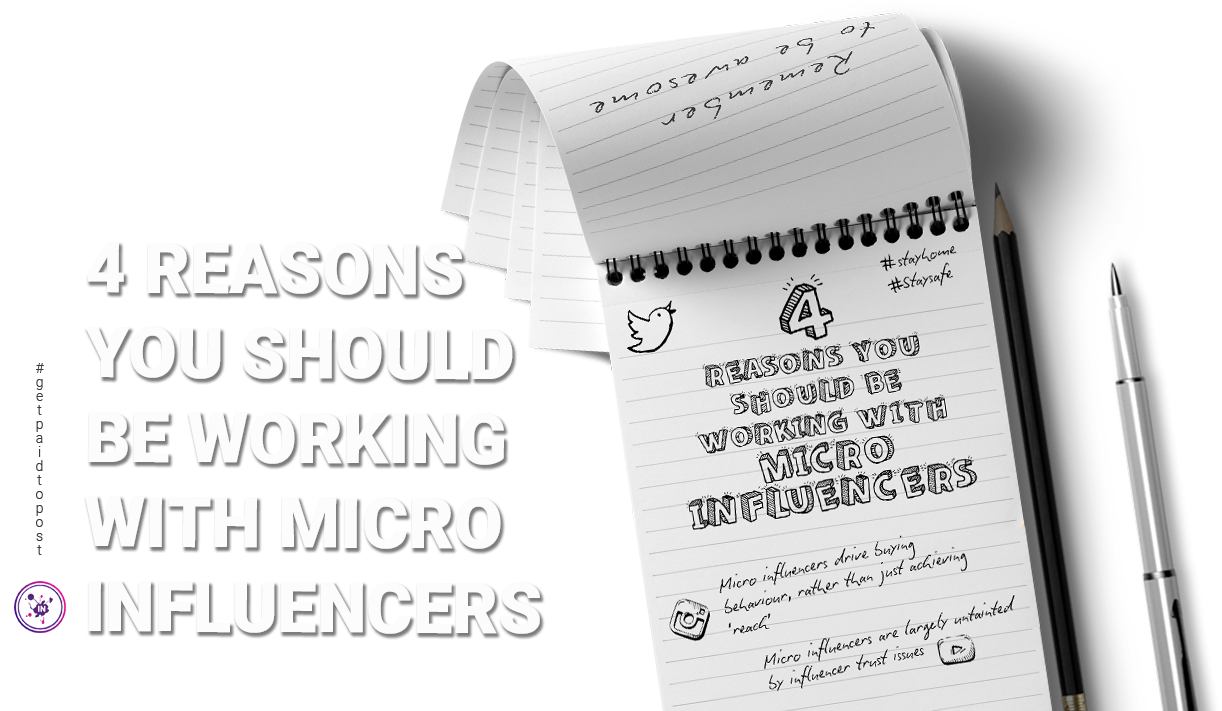 I wrote this blog about 8 weeks ago and never got around to posting it up but with the focus on social media right now and the fact that influencers often hold the key to a brands’ audience, I thought I better get it live.

As far back as 2016, there was compelling research to support the fact that micro influencers drive direct buying behaviour. Whereas the traditional approach to influencers was to pay the influencer with the biggest follower base in order to reach the largest amount of people, it’s fair to say that that whole mentality is now ripe for reassessment. After all, reaching a large number of people probably isn’t the ultimate goal of your marketing. Marketing carried out in any manner is ultimately something that’s done to influence and increase turnover.

What luck then that using micro influencers in your marketing does just that. The 2016 research found that 82% of respondents to a survey were highly likely to follow a micro influencer’s recommendation. The same research identifies why this can be the case: micro influencers have 22.2 times more conversations per week regarding recommendations on what to buy than the average consumer. Micro influencers are seen by many as a ‘go to’ source when it comes to deciding on a purchase in the area they specialise in. When you think about it, the process is entirely natural. Micro influencers have built up relatively large follower bases by being an expert in their chosen area and of course, you’re going to go to the expert for a purchasing recommendation. The only new thing here is that brands have identified this need for an expert in the marketplace and are partnering with said experts on their products.

The risks of those factors coming into play with micro influencers tends to be lower partly, again, due to their background. Micro influencers are not just content creators, they are genuine social media users who engage with their follower base. They invest time and creative resources in generating meaningful relationships with their followers. And, of course, you can’t have a meaningful relationship with a ‘bot’! There’s a compelling argument that micro influencer followers see themselves as peers of the influencer, rather than fans and we know that we all listen to our peers.

Micro influencers also tend to engage in fewer partnerships. This means that their social media feeds are a mixture of paid promotions mentioning products or services and the content they want to put out there. Their feeds are those of a genuine authority on something, rather than just a solid line of sponsored posts.

The highest paid influencers on social media can earn in excess of $1 million per post and, really, the individuals that earn that sort of fee are celebrities in their own right, rather than strictly influencers. Only those with the very highest marketing budgets are likely to be able to afford fees in the millions so if you want to engage in influencer marketing you’ll likely have to set your sights on accounts with fewer followers than the likes of Kylie Jenner and Cristiano Ronaldo.

But, hold on… remember the point above about driving buying behaviour. Paying $1 million for a post might generate a high reach, but if it sells very little extra of your product then is it money well spent? If you had $1 million to spend, then all of the evidence in the influencer marketing space currently suggests that you would be better splitting it between a large number of micro influencers at a very reasonable ‘per post’ spend. What’s more… if you were to do just that, then you’d achieve a very respectable reach as well. And you’d have likely sold more of your product. There really is very little not to like about these micro influencers.

Micro influencers have the exact audience you want

Micro influencers tend to operate in a niche, whereas macro and super influencers tend to be their own niche. We know that Cristiano Ronaldo followers are interested in Cristiano Ronaldo, for example, but given Ronaldo’s history and the content he posts what else can we definitively say about them? Are they childhood Manchester United fans, now in their 30s, living in the UK? Or are they Italian Juventus season ticket holders? Or are they a fan of the footballer’s CR7 fashion brand? That’s a lot of potential demographics that we could be hitting with an influencer campaign centred on Ronaldo’s account.

It’s a fairly safe bet though that anyone who follows an influencer, who only posts pictures of home-baking, recipes for cakes and biscuits is interested in baking, and that they might be a good influencer to work with on an expensive range of cookery products. This niche focus also has a compounding effect on engagement. If you only follow Ronaldo for the fashion then you’re probably not engaging with him when he posts pictures of himself scoring goals for Juventus. Evidence suggests that accounts with 1,000 followers can generate 85% higher engagement rates than accounts with 100,000 followers, likely due to the fact that the smaller follower accounts are posting exactly what their audience cares about.

Hopefully micro influencers sound as good to you as we’ve always known them to be. Interested in working with some and driving buyer behaviours towards your product or service? We can help with that.